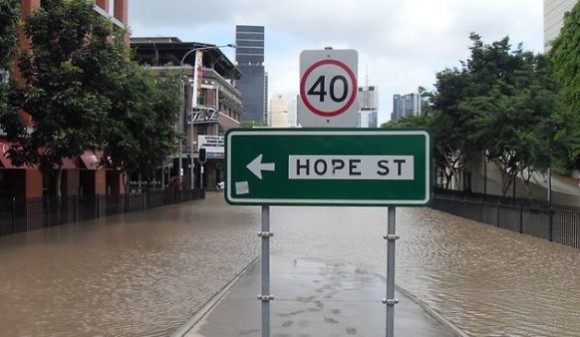 My only two home towns of the last 16 years, Ipswich and Brisbane, were hit by 20 meter flood levels beginning on the 11th of January 2011.

Thank goodness, I’m fine. I’m lucky to be living on a hill like other family.

Thousands of Queenslanders and friends weren’t so fortunate. The death count is at 20 and as many people are reported missing. The financial damage is also sad with $12.7 billion needed to repair the damaged Queensland, the North-East state of Australia. It’s the most destruction I’ve seen in my lifetime.

Friends rescuing a crippled neighbor from the floods. The bald fella always wanted a mention on this blog so his rescue efforts get him just that.

The blame-game has started with estimations that the “natural disaster” could’ve been prevented if more water was released from a major dam two days before the flooding.

Wivenhoe dam being released at 194% capacity. Thanks to @Michael_Usher

It’s not all gloom and doom. We’re Australians.

I’m surprised by the compassion of Queenslanders. It took me 3 hours to get through the city on Saturday (to help the clean up in Ipswich) because 10,000+ volunteers were on their way to help others recover. Riding on the recently-recovered trains I hear strangers talking with one another like friends.

King Wally at Suncorp Stadium ready to go under! Thanks to @mackiemarsellos.

Not all sporting locations were ready to go under:

My beloved basketball stadium I play at weekly. Up for a game of pool basketball?

If you want to help, please donate through the Queensland Government. Even one dollar helps.

Checkout these amazing before and after shots from ABC News. Slide your mouse over the images to see the impact of the floods.

Watch on a boat as a news reporter surveys the damage and interviews victims who maintain a positive attitude.

Our Go Between Bridge refuses to let boats go between it and the water. Epic ownage.

“We are all in the gutter, but some of us are looking at the stars.” – Oscar Wilde

28/01/2013 Update: Two years since these floods, the state has been hit by another flood. Places like Colleges Crossing literally had redevelopment completed one month ago only to be flooded again. It’s not as bad as the last floods. Still horrific for the families and businesses hit twice in two years.