When the time came for me to visit Japan, I jumped on the plane. I always wanted to watch – and more so caddy – for my brother Nathan as he played on the Japan Golf Tour Organization (JGTO) with the likes of Japan’s golfing prodigy Ryo Ishikawa. After hearing Nathan brag about Japan, listening to others talk-up the country, and the appropriate timing for a trip all coming together, I just had to do it. Here’s my bizarre reasons why you too must visit the land of the rising sun along with the top things to do and see to make your stay worthwhile.

With all this in mind, here are my five recommended things to do in Japan – all for less than US$100. It’s not the only guide to live by because it’s a strange type of guide and I left out a lot of great places. Some may even call this guide retarded, but it’ll give you a unique perspective to amuse yourself in Japan. 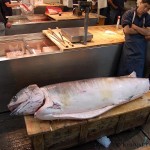 A good Tuna meal for me. Plenty of these big fellas throughout the market! 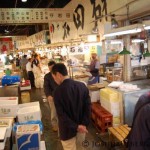 Multiply this by 40 and you’ve got the customer seafood markets. 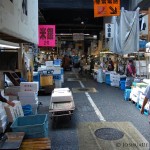 The most space you’ll find in the markets. 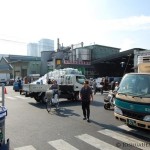 The market’s entrance. This photo doesn’t do its popularity justice.

The Tsukiji fish market is one of the largest fish markets in the world. You won’t believe your eyes at its size! “Market” hardly does it justice – it cannot be compared to your local town’s markets filled with Nanna jams and craft work.

The fish market is free to visit. You get to walk amongst the bustle and speed of all the workers during their daily work.

Make sure you get there at 5am, which makes it great to visit after a night of partying at Roppongi. The best action at the fish markets is between 5am and about 6:30am when the auctions take place.

I don’t speak from experience, however. I was set to visit the fish markets on my last day in Japan, but I must have turned off my alarm! I went to bed at 3am and woke up horrified to see the time at 8am. That got my adrenaline pumping and shot me out the door and on the train towards Tsukiji.

Don’t go to the market on Sunday like I did my first time. It’s closed then and you’ll be left to walk around like a stupid foreigner. Grab a map at a hotel with details about the market or prepare well beforehand.

After browsing the markets for a couple of hours – yes, it’s that fascinating – I recommend you head back towards the entrance where you’ll find shops, markets, and restaurants designed for the visitor. Buy a few souvenirs. Definitely eat some raw sushi for breakfast! You’re not going to taste fresher seafood. What a healthy way to start or finish a day.

2) Eat a Variety of Foods 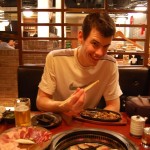 Yours truly enjoying an izakaya (a sit down place to drink and eat). 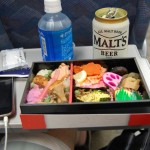 A variety of foods in a box set on the Shinkansen that clobbers away at 300km/hr.

Tempura on the left with ramen on the right. 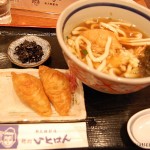 Yours truly enjoying a BBQ in Tokyo. The meat was awful and overpriced. My worst food experience in Japan. Sorry, don’t remember the place’s name. 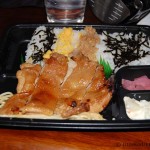 A box set from 7-Eleven for 4500 yen. Potato is bottom-right. The pink food is ginger.

Enjoy their unique cuisine. Eat sushi, tempura, miso ramen, gyoza, and knock yourself out with some deadly wasabi.

Not only does the food taste great, but I found eating great dishes throughout Japan and even central Tokyo cheaper than Australian food. A nice bowl of ramen with kimchi and an Asahi beer can be grabbed for less than US$10 at most places. Don’t be scared by the myths of Tokyo food prices. You can easily walk the streets to find restaurants within your budget.

You can easily grab a box set from 7-Eleven or another convenience store. Convenience stores are everywhere and well-priced compared to Aussie 7-Elevens. Similarly, don’t feel guilty about eating at McDonalds. Their menu is diverse and unique to Japan.

Use chopsticks while you’re eating or you’ll really stick out like a clueless foreigner. If you don’t already know how, learn to use chopsticks on your vegetables at home to practice before your trip otherwise you could end up starving yourself.

Also try their beverage sake (also known as “Nihonshu”). I hated the drink, which tasted like low-quality port, but maybe that’s because I was a cheapstake and brought it in a popper. 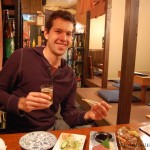 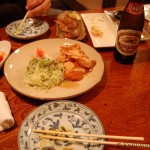 Sample of dishes and drinks all for less than 45000 yen! 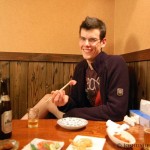 I don’t know how, but I managed to fit.

Sit on the ground with your cushion. Nibble on salty edamame over a Japanese beer. Amuse yourself at Japanese businessman laughing and wobbling around. Soak in the real Japanese atmosphere.

I went to my first izakaya in Taki within Kato City. After spending five minutes getting down to the ground and shocking my body with the altitude drop, my brother and I had fun trying to order. Eventually we managed to communicate with gestural language that we wanted the waiter to order for us. He did and by the end we were pleasantly stuffed. Two big eaters were satisfied for 44000 yen! That’s unbelievable food and drinks for less than US$50!

I recommend you go to a izakaya in a non-major city and you’ll really feel a wonderful atmosphere. If you want, go to the same restaurant as I did, print out some of the photos above taken at the restaurant and try to communicate that I referred you! The guys working there will probably remember us two Gaijans (Japanese for “foreigners”) because we literally stood out and managed to joke with them despite the language barrier.

Most Gaijans stick to major cities like Osaka and Tokyo so it’s exciting for workers in small towns to serve non-Japanese. I think the real Japan is in smaller towns that rarely get visitors.

I just noticed my first three recommendations revolve around food. Strange that. Time to normalize this guide a little.

You still need to visit the common tourist destinations. The top ones in no particular order include: 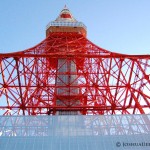 The beautiful Tokyo Tower you can enter. 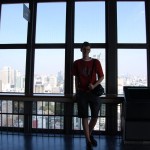 Entrance to the Imperial Palace, Tokyo, open only on January 2 and December 23. 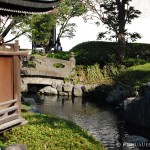 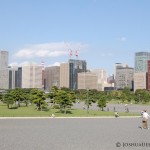 Large openings outside of the palace. 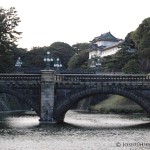 The gardens surrounding the Imperial Palace.

I never went to Mount Fuji – totally forgot about it! Mount Fuji. No, I didn’t evolve wings to take this photo courtesy of kla4067.

Parents, if you’re freaked about your teen’s fashion habits, you won’t be any more once you checkout the clothing in Harajuku. Not so unusual styles in Harajuku. Just a sample of the fashion in Harajuku, Tokyo (photo courtesy of ehnmark). 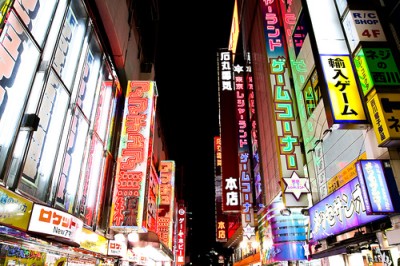 Akihabara aka ‘Electric Town’ in Tokyo (photo courtesy of cocoip).

I’m putting Akihabara in here because it’s geek village and I’m a nerd. If you’re into electronics, bring several spare pants because you could wet yourself in excitement. From animation and manga, to electronics and gadgets, you’ll feel the charge pulsating through your body.

Checkout the retro gaming or take part in the Nintendo DS competitions littered outside shops. Bring your hiking boots to browse the six-floor Yodobashi-Akiba packed with nearly every piece of electronic equipment you could want.

You’ll be turned off by Akihabara if electronics isn’t your thing. To be stereotypical, maybe the guys can get weird at Akihabara while the girls get freaky at Harajuku.

I took some good photos and videos of Akihabara with my digital camera, but the camera got a memory card error and decided to erase itself of all evidence that’d make any double-zero agent proud.

Interact with the People

Japanese are the real secret of Japan. Every person, but one, was excited to help me when I was lost, which was quite a few times. They’d be going about their day in a zombie-like mode when this big Gaijan approached them saying, “Sumi Massen” (Japanese for “excuse me”). Our eyes met, their body angled towards me, and a smile grew on their face.

One of many times I couldn’t find my hotel. After “sumi massening” myself to six different persons, pointing to a small map of my hotel’s location, and wondering around for an hour trying to hunt down the elusive building, one woman lit up at the opportunity to help me find my hotel. She asked another man in Japanese (no chuckles emerged so that’s a good sign no dialog put me down) who couldn’t pinpoint the building. She then stopped two women on the streets – one of whom ran into a post office, grabbed a map, photocopied it, highlighted my route, and sent me on my way!

It’s not all glamorous. On the trains it’s funny how an empty perimeter formed around me. Commuters stood before sitting next to me. Maybe it’s just what they do around Gaijans or maybe they’re scared of someone who’s head scraps the roof of their trains. Whatever the reason, Japanese are still friendly. Their culture is extremely polite.

Simply be in their presence as much as possible. Though you may feel comfortable around other foreigners, get around Japanese. Ask them questions in broken English, point to objects, and resort to the lowest levels of human communication we all understand. Center Hotel Tokyo laying out the rules for guests. English isn’t everyone’s forte, but the language differences make for an interesting experience

How to Make the Most of Your Visit

In addition to interacting with Japanese to make the most of your visit, you must use the train system to do anything in Tokyo. I averaged six trains a day as commuters switch and swap to get where they want.

Get a cab one time to giggle at the automatic doors and a taxi driver’s white gloves then use the train line. It’s confusing at first, but snatch the necessary maps at a station and study the system before departing for your flight.

My last piece of advice is something I’ve mentioned, but needs repeating, because I saw too many afraid foreigners: talk with Japanese! Build your confidence. You’ll find yourself doing something primitive with your nonverbal communication. Communicate in a primal language akin to flapping your wings and making buck-buck sounds to describe a chicken like I did at a restaurant – and I think you’ll agree with me that Japan is a great country you were glad to visit.

If you’ve visited Japan and found something you love, share it with me and other readers below in the comments section.

This site uses Akismet to reduce spam. Learn how your comment data is processed.